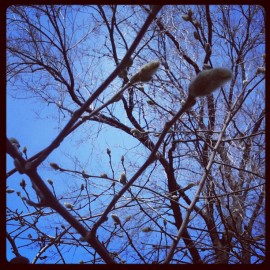 I’ve been traveling a lot lately, back to Michigan last month and NYC last weekend. This means a lot of eating out, and a lot less eating sweet. Well, a lot less writing eating sweet. But I have spent a lot of time walking, and enjoying the sunshine and little buds just starting to bloom. I discovered a little park not far from my apartment and I’ve been walking there almost every day, snapping pictures and catching up on NPR podcasts. (Am I a full-blown yuppie or what?) 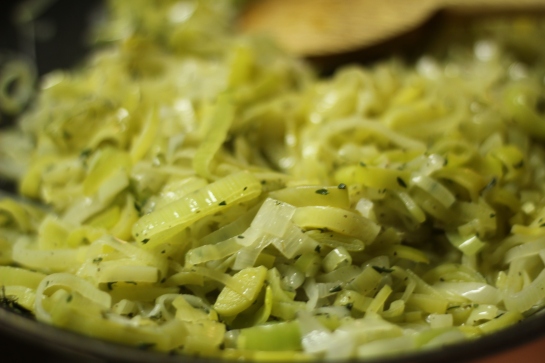 The vegetables these days have been strikingly vibrant at the markets, maybe due to the weather, maybe just due to the skill of the Amish farmers who dot the landscape around Philadelphia. It’s hard to resist picking up one of everything! While shopping for a pasta dish that includes swiss chard and potatoes, I grabbed two big bunches of leeks, thinking I would throw them in too–then forgot I had bought them. (This, as it happens, is VERY typical.) I thought at first I’d use them in a soup but it’s just so gosh-darn SPRINGY outside…so a few minutes of searching for “interesting ways to feature leeks” on google rendered a version of the recipe below.

I usually attempt to match up recipes I find online with ones I have in physical cookbooks, and so this one is an amalgamation of Christopher Kimball, Alice Waters (and Small Potatoes), Deborah Madison, and, ahem, moi. The leeks are flavorful and beautifully simple, braised quickly in white wine and thyme and then baked in a savory tart crust. If you want to just buy your own crust, I don’t think it would make a huge difference (Whole Foods and Trader Joe’s both have all-butter, frozen crusts that are not bad at all). I just love the buttery-rich dough made from scratch. This is a lovely starter for a dinner party or a perfect side dish for roast beef. And, I know I’m always saying these recipes are easy, but–especially if you just buy the crust–this will take you twenty minutes of work and it looks real fancy.

Leek Tart
inspired by Christopher Kimball, Alice Waters, and Deborah Madison
Note: This is equally delicious as a free-form galette or a topless pie. I found a Martha Stewart recipe that calls for baking this in a rectangular tart pan, which I’m sure would be beautiful. Use whatever you have! I put out some fresh goat cheese when I served this, thinking it would need a little creamy kick–it went untouched. The tart stands on its own.

1. For the crust (if you have bought or made your own crust, skip to step 4): Combine the flour and salt in your bowl, then add the butter. With your hands, work the butter into the dry ingredients, sliding and flattening the fat between your fingers until it is evenly distributed. Add ice water, a little at a time, until you can form a ball. Sprinkle a little more water over any remaining dry ingredients, gather it all together, wrap it in plastic wrap, flatten it into a thick disc and refrigerate for at least 30 minutes. (You can leave it overnight, or freeze it at this point.)

2. When you are ready to roll out the dough, you may need to let it soften a bit on the counter for about fifteen minutes. Roll it out on your lightly floured work surface to a thickness of about 1/8″. Fold it in quarters, line the point up with the center of your tart pan, and unfold it carefully, gently pressing it into the crevices and corners. Trim it about ¼” above the rim, cover it again with plastic wrap, and freeze for another 30 minutes.

3. Preheat your oven to 425°F. Take the crust straight from the freezer and slide it into the oven. (This eliminates the need for pie weights.) Bake for about 8 to 10 minutes, until the crust is just beginning to color and has a “set” appearance. Keep an eye on it during baking; if the bottom puffs up at all, prick it lightly with a paring knife. Cool the crust on a rack.

4. For the leeks: Chop the tough green stems off and freeze for stock, or discard. Fill a mixing bowl with cold water. Slice the white and pale green roots into ¼” rounds and slide them into the bowl, stirring them around with your fingers until they are free of dirt. Drain off the water or pour them into a colander.

5. Heat the butter in your saute pan over medium-high heat. When it is completely melted and the foaming has subsided, add the leeks and cook, stirring, for about five minutes until they start to soften. Add the wine and thyme and bring to a simmer. Cover and cook for another five minutes or so.

6. Uncover and stir, keeping the heat between medium and medium-high until the liquid reduces and thickens, about 2-3 minutes. Add salt and pepper to taste and remove from heat. Preheat your oven to 400°F.

7. Scrape the leeks into the partially-baked crust, distributing evenly. Bake for 5-7 minutes, or until the crust browns. Cool in the pan for about 5 minutes before unmolding and slicing. For a delicious, but unnecessary addition, sprinkle goat cheese over the top just before baking. Serve with thyme sprigs criss-crossed on top.